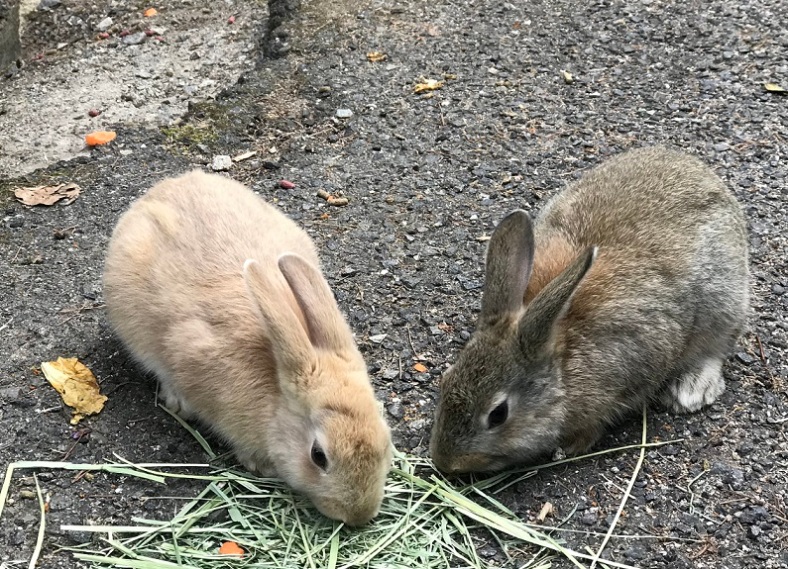 I’m feeling very excited, since today I’m headed to Ōkunoshima ― also known as Rabbit Island ― a place I have been dying to go to for ages. As you can tell from the name “Rabbit Island”, a lot of rabbits make their home there, and my goal today is to go and meet some of them!

There are no rabbits living out in the wild in Hong Kong; the only ones we get to see are pet rabbits. In To Kwa Wan, as a little girl, I loved visiting an old-fashioned pet shop to look at the gold fish, hamsters, guinea pigs, rabbits and so on . . . As I recall, there were two metal cages near the entrance to the shop, one containing a large number of hamsters, the other, numerous white rabbits. All the rabbits were white, which gave me the mistaken idea that rabbits were always this colour. My favourite thing was to watch the hamsters: although they had little, short legs, they moved about with great agility, darting here and there, cute and fun to watch. Back then, I had no strong interest in rabbits: yes, they were snowy white, adorable and very innocent-looking, but if you took a close look the eyes of these white rabbits were all blood-red and, although I couldn’t explain it, I found them creepy and I was frightened by them. It wasn’t till many years later, when I had seen grey rabbits and off-white ones and I realized that they could have black-coloured eyes, that I began to change my mind about them.

To get to Rabbit Island, first of all you have to go to a place called Tadanoumi to catch the ferry. At the ticket-office, there are packets of rabbit food for sale, tiny little packets, and immediately, each of us bought one. On it, it said in English: Present your rabbit-food packet at the counter on return to receive a small gift.

As it turned out, it happened to be the Easter holidays and a Sunday as well, so the place was filled with Japanese tourists: couples, as well as whole families including the aged and the infant, were setting out with one and the same objective in mind ― to pay a visit to the rabbits. The trip by boat took about fifteen minutes, less than the time it took to queue up for tickets and wait to go on board.

When we arrived, there were already crowds of people milling around in the vicinity of the pier, but it wasn’t people I was wanting to look at. Before long, I caught sight of a rabbit: it was off-white in colour, rather plump, and sitting in a very carefree and leisurely fashion beneath a large tree. With great caution, slowly and calmly, I walked up to it. It didn’t really react in any way, acting rather stand-offish. And so I took the offensive by trying to lure it with the promise of gain, taking out by bag of rabbit food. Before I’d even managed to get the bag open, a grey rabbit suddenly appeared from one side to get something to eat from me. The scene was a very cute one ― two rabbits together right there in front of me ― and attracted a little Japanese boy, who came over to say hello to the rabbits holding a carrot in his hand.

It’s true: there really were lots and lots of adorable rabbits before me, but if you looked carefully, you got the feeling that something wasn’t quite right: they didn’t really look like wild rabbits but pet ones, perhaps a bit dirtier than pet rabbits but more or less identical. I had seen rabbits in the wild in England: they were thinner and longer [than these ones], and not so sleek-looking. Their fur seemed rather coarse and stiff, but they were extremely agile in their movements. I tried to find out the reason why this was so: as it turns out, the island of Ōkunoshima has a dark chapter in its history, because it was once a secret base for the manufacture of poisonous gas. No one ever lived here on a permanent basis.

There are two explanations for how rabbits came to be on Ōkunoshima. There are those who say that they were used in experiments and, when the war ended and all those involved had to leave, all the rabbits were set free. Another explanation is that the rabbits were once kept as pets by the people working on the island, and were left behind when they departed. Whatever the case, the rabbits are now the sole residents of Rabbit Island ― and its superstars!

Since there were too many people in the vicinity of the pier, we decided do a circuit of the island just to see if there really were as many rabbits on it as it is rumoured. Along the path, there were spots for picnicking and for camping, and so there was an endless stream of people ― but the “stream of rabbits” was just as endless. The two were evenly matched. Things stayed pretty much like this until we entered the forest. Although there were less rabbits than before, there were nevertheless a large number of them; in contrast, the number of tourists had dwindled to almost nothing ― every now and then we saw two or three. It was obvious that the rabbits that lived in the forest were much more timid, and were less inclined to come up to you to get something to eat but, once you did feed them, they would eat and eat without stopping. Another thing was that they didn’t like to be patted so much, not like the ones by the pier who didn’t mind at all. My guess is that the forest rabbits were slowly reverting to their original state . . .

After more than two hours walking round the island, we slowly wound our way back to the pier and caught the ferry back to Tadanoumi. When I redeemed the bag that contained rabbit food for my gift, inwardly, I couldn’t help feeling admiration for the Japanese: it was a clever way of getting us to bring back our rubbish with us, reducing the burden on the island. As I left, a question suddenly crossed my mind: would the rabbits get enough to eat in Winter when there weren’t many visitors? I chuckled to myself: I knew that there was no way they would not get enough, but resolved to make sure that next time I went back it would be on a quiet Winter’s day.