In this “Story of Gun Yam”, the Buddhist Goddess of Mercy, we are told of the fate of Princess Miu Sin who, in order to cure her father of some terrible disease, offered up her own eyes and hands as necessary ingredients of the only medicine that would make him better. It is an extraordinary story, but one constantly being re-enacted daily in our own times by ordinary men and women, many of them persecuted and unheralded.

This is a scripted video, so the Cantonese is fairly formal and, of course, much of the vocabulary is of a religious nature, but at the same time very usual in terms of heightened cultural understanding. As for the grammar, there is one use of 使到 sí2 dou3 to express causation [使到眾生得到解脫], perhaps in place of the usual colloquial 令到 lihng6 dou3, as well as the refreshingly idiomatic 無論邊個化身, meaning “regardless of which incarnation it happens to be”!

You can view the video here. Since it is a YouTube video, you can slow down the playback speed if you wish: at 0.75 and 0.5, the sound quality is still good. And remember, if you want the standard jyutping romanization or to check any of the Chinese in the text, please consult the Sheik Cantonese on-line dictionary.

You might also like to make use the Ekho Text to Speech Converter if you have trouble matching any part of the transcribed Chinese text to the spoken version. Just make sure you select “Cantonese” under the language menu before you paste cut and text into the relevant box.

Note: The character 其 kèih4 is frequently used in formal written Chinese as a possessive pronoun meaning “her, his, its”, etc. Observe too that 觀 gūn1 means “to hear” in this context rather than “to see”, although sight is strongly suggested by the presence of 見 gin3 in the written form.

In the scriptures, it is mentioned that if any person finds themselves in distress, all they have to do is to say silently to themselves the venerable name of the Gun Sai Yam Bodhisattva [觀世音菩薩] and Gun Yam will hear that person’s [其] voice and enable any living creature [眾生] to gain liberation.

Over hundreds and thousands of years [千百年嚟], faith in Gun Yam has sent its roots deep into [the lives of] ordinary Chinese people. Taoism uses the respectful term of address “Master of the Barge of Mercy” to refer to Gun Yam, an immortal [仙真] who, through religious practice [修行], witnessed the Tao and became an enlightened being able to save people from distress.

In the minds of ordinary people [民間人士] living in the Song dynasty, Gun Yam was the third daughter of King Miu Jong of the ancient kingdom [called] Bak Kyut, Princess Miu Sin. She had once spent time at Incense Mountain (or Gandhamādana), cultivating herself spiritually. She later achieved realization [證道成仙] and became Gun Yam. She gave her own two eyes and her hands to be used as medicine for the cure of the illness of her father, the king. When her father found out, he was deeply grieved and made a heartfelt wish, hoping that the saintly spirits could enable his daughter’s eyes and hands to be restored [重生]. Suddenly, Miu Sin vanished and there in the sky appeared the dharma appearance [法相] of the Bodhisattva of Great Mercy with a thousand arms and a thousand eyes.

According to written accounts, Gun Yam has various different incarnations, but whichever the incarnation, the image of her responding to calls for help has penetrated deeply into the life of the people, and not a few of the faithful turn to Gun Yam, both to worship her and to beseech her to grant them their wishes. However, while worshipping Gun Yam, we must try to learn the compassion she has for all living creatures, and to perform good deeds in our daily lives. Only then can we be blessed by Gun Yam. 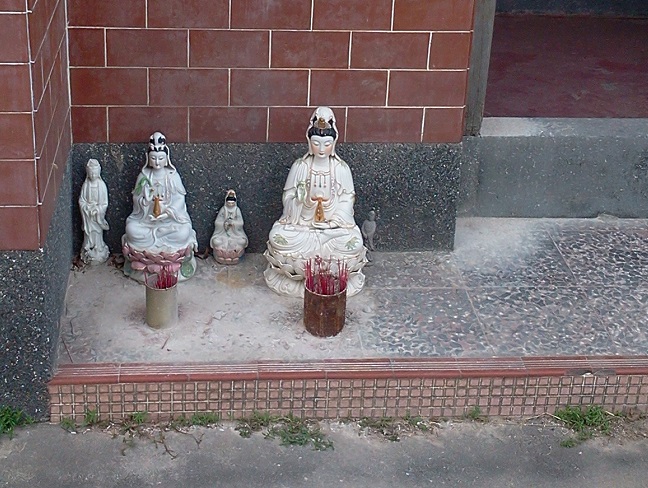 Ainslie Meares (1910-1986) was a well-known Australian psychologist with a particular interest in the use of meditation to relieve pain. Among his many books, there is an unusual work with the title Strange Places, Simple Truths, a collection of short prose pieces about his travels to various parts of the world in search of knowledge about alternative approaches to pain. Although Hong Kong is not one of his destinations, the book ends with a short text about the author’s very personal connection with the place.

Since I first started to write about these experiences, I have wanted to say something about Kwan Yin. But somehow it has seemed too difficult. I think I have fallen in love with her, and that of course makes it hard.
自從開始以短文敘說我嘅旅遊經驗，我就一直打算講吓我對觀音嘅觀感。但係唔知點解，撰寫呢個題目總覺得太難。我諗，因為早就愛上咗佢，所以想寫以佢為主嘅文章，真係變成一件難以完成嘅事。

It must have been on my first visit to Hong Kong. In a curio shop I found a beautiful stone figure. This was some time ago, and then I did not even know the name of the lady who has come to steal my fancy so completely. She was standing at ease, about two feet high, clad in the flowing drapes of the classical Chinese, and with that mystique of expression which communicates the indefinable. I knew I had to have her. I bargained and bought her. And since then she has stood on the bookshelves in my study.
想必係喺我第一次去香港嗰陣時發生嘅。喺一間古董珍品店裏面，我發現咗一座優美嘅石制雕像。由於呢件事係好耐之前發生嘅，儘管佢之後令我全身全心墮入愛河，但係當時連佢係邊個我都唔知。呢個雕像悠閒地站立，身高兩英尺左右，穿著線條流動嘅古典中式服裝，而佢臉上嘅表情真係令人覺得莫名其妙，藉此傳達一種神秘又難以解釋嘅狀態。喺嗰刻我知道我一定要擁有佢。經過一番討價還價之後，我終於買到佢。自此以來，佢喺我間書房入邊書架上面一直站立著。

When one falls for a girl, a single picture is never enough. On my next visit to Hong Kong I spent the whole of my time in search of another. Do not be mistaken. Do not think of the hundreds of factory made figures of Kwan Yin with which the shops abound. No. My lady is not like those. The fact remains that each time I have been to Hong Kong I have come home with a stone figure of my lady. It has become a family joke.
愛嚫一個女人，僅僅擁有一張相片永遠不夠。第二次去香港時，我用曬所有時間去揾另外一座同樣嘅小雕像。你千祈唔好會錯意。嗰啲由工廠製造嘅，喺商店成千上萬咁擺放出嚟嘅觀音塑像，遠遠唔似我呢位親愛嘅女仕。絕對唔係。不過，無論如何，結果每次喺香港返澳洲，我都會帶呢位女仕嘅石制雕像返屋企。呢件事已經成為屋企人嘅家庭笑話。

One of the strange things about her is that she was originally a man. He was a Bodisatva, one who has attained Buddhahood, a kind of saint; and his saintliness was concerned with the depth of his compassion. Bodisatvas are always rather sexless. Perhaps all that is spiritual within them leads to something beyond sex. Then with the spread of Buddhism from India to China, Kwan Yin became worshipped as a female deity. It may be that compassion is an attribute of woman rather than of man. People think of her as the taking-away-fear Buddha. To Europeans she is known as the Goddess of Mercy. I know nothing of China, but I have seen her worshipped widely by Mahayana Buddhists in Hong Kong, Taiwan and Japan.
一個令人感到驚奇嘅事實係：佢原來係男性。佢已經成為菩薩，即悟到佛性嘅一個人，一種聖人，而且佢嘅佛性係同佢無限嘅慈悲連結一齊。菩薩多數係冇乜性慾嘅。菩薩內心嘅心靈或許能夠引導佢哋超越性慾嘅境界。隨著佛教由印度延至中國，觀音就被視為一個女性神而敬拜佢。可以咁樣講，慈悲或者係屬於比較女性嘅一種品質。眾生一般認為佢係能夠帶走恐懼嘅佛陀，不過對於歐洲人嚟講，佢係仁慈嘅女神。我對中國內地一無所知，但係喺香港、台灣同埋日本我曾經親眼見到佢受到摩訶衍那（大乘）佛教教徒嘅廣泛敬拜。 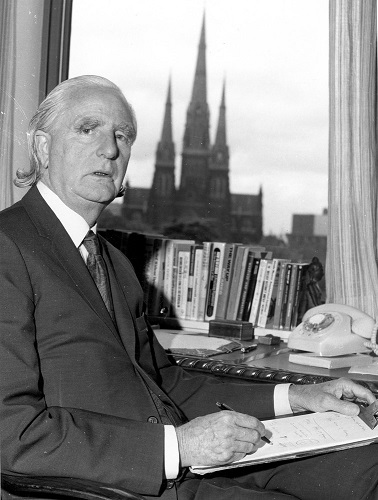 I have found my stone image brings with it a sense of beauty and repose. But more than this, there is such a sense of mystique that it seems to have captivated me. So I continue my search for another. I have searched around the dust of old shops in narrow streets where such things are sometimes found. I have sought her from lush curio shops of the great hotels, where the Rolls-Royce and the rickshaw wait outside. One very hot day there was an old rickshaw man squatting on the foot-board of his rickshaw as is their custom while waiting for a passenger. He was very old. He was half asleep, half in a stupor. He was a worn-out man; his body almost gone, his mind insensitive to the noise and bustle that was all about him. I had just bought half a dozen mandarins to take to my hotel room. I quietly put one by his side, but he awoke from his stupor, and his eyes looked at me. Then arms stretched out from all directions, and I had to be off. Then, by strange coincidence, twice in the next few days I saw an old rickshaw-man wave to me. It was he again, not asking for more, but still bowing his thanks. And he seemed stronger. Strength that could not have come from my miserable mandarin.
呢座石制雕像優美，又能帶嚟安寧嘅感覺俾我，更加重要嘅係佢特有嘅神秘色彩，徹底迷住了我。因此，我到而家仲繼續揾揾其他觀音雕像。喺狹窄路上嘅舊式舖頭入邊，喺一片灰塵中曾經尋尋覓覓，期望揾到呢類珍稀物品。喺香港嘅豪華酒店中，亦有專賣古董珍品嘅商店，我都會試吓去呢啲商店揾揾佢。呢類酒店嘅外面通常泊著努斯來斯名貴汽車或者人力車。仲記得有一日，天氣非常之炎熱，我見到有一個人力車司機，佢按照佢哋嘅習慣，喺車上嘅踏腳板上面踎住，等吓一個乘客。佢年齡非常之高，當時半睡半醒，好似冇乜意識咁。阿伯十分老弱，身體狀況已經疲憊不堪，對四圍喧鬧已經達到痲木嘅地步。我當時啱啱買咗半打柑橘，打算攞返酒店房間。有見及此，我靜靜雞將一個柑橘放喺佢身邊，不過佢居然突然間醒過嚟，雙眼凝凝望住我。因為周圍其他人都伸手想攞到柑橘，所以我只好拿拿聲走開。咁啱得咁橋，之後幾日，我居然兩次遇到呢位年紀老邁嘅人力車司機向我揮手。佢唔係想問我要求啲乜嘢，只係以鞠躬嘅方式向我表示感激。佢好似好翻啲，精神體力有所提高，當然精力嘅提高同我送俾佢嗰個微不足道嘅柑橘肯定毫無關係。

In my search I have passed women in the briefest mini skirts I have ever seen, women in the traditional garb of the Chinese, women in rags, women like Chinese film stars with neat dresses and trim figures. And women with chubby babies strapped to their backs, and women with emaciated children begging for a few cents. I have been to shops where they would discuss nothing until I was seated on a china stool, and had had a cup of green tea. In others they cared little if I came or went, and in some their anxiety to sell me something spoke of their need of basic necessities. A thousand times I have asked ‘Kwan Yin, Kwan Yin’. But they could not understand my pronunciation. ‘Goddess of Mercy’. But they could speak no English. So I have rummaged  around their shops. I have examined hundreds of stone figures of Kwan Yin, but none has had the strange quality of the first one which I so happily stumbled on.
喺我尋覓嘅過程中，我經過身穿短到冇得再短嘅迷你裙嘅女人。我亦都見過穿著傳統服裝嘅女人，衣衫襤褸嘅女人，穿著稱身衣裳、身材苗條像中國明星般嘅女人。另外我又曾經見到孭住肥嘟嘟啤啤仔嘅女人，同埋抱住瘦蜢蜢細路仔嚟乞錢嘅女人。而且，我去過好多間舖頭：有啲要等我坐低瓷櫈仔上飲完一杯綠茶先至問我想買乜嘢；有啲服務員對我都漠然不關，愛理不理；而有啲，好似要賺錢養家過活，所以急於賣嘢俾我。我到而家已經喺舖頭講過「觀音，觀音」過千次，但係佢哋無法聽明我嘅發音。用「Goddess of Mercy」亦都唔得，因為佢哋唔識英文。攪到收尾我喺佢哋舖頭裏面揾嚟揾去，曾經仔細咁觀察過好多好多嘅石制觀音雕像，但係都揾唔返好似第一次偶爾揾到嗰座咁、擁有特有嘅氣質——遇到第一座嘅運氣未曾重複。

I have sought her through all the turmoil that makes Hong Kong one of the most fascinating cities of the world. Through the bustle of it all; but no jostling, no pushing, that is not the way of the Chinese. Through the smell of narrow streets, where the stench of it would be enough to stop my breathing. Passed beggars who made worse their deformities, and those who sat in the gutter quietly awaiting death to take them. Passed old men who looked as if they knew what it was all about; passed women whose gaunt eyes told that they had learned to accept what it was. Stepping over gutters of filth and children. Passed police whose impassive calm and efficiency makes them some of the finest in the world. Groups of jabbering tourists on their world cruise bent on buying junk from the Kowloon factories. Children playing in the streets whose widest horizon is the gutter of the next alley. And through all this nobody interferes. And it goes on late into the night. Women and girls come who would lead me to another love, but my desire is elsewhere.
香港嘅凌亂令佢成為世界上最為吸引嘅城市之一，而我正正喺係呢種凌亂之中去尋找觀音。雖然人多混亂， 但係當中冇人擠湧，冇人撞你――推撞唔係香港華人嘅風土習慣。我又經過氣味難聞嘅狹窄巷仔，要忍著唔透氣。我又行過急於討吃嘅乞兒，其中有啲故意將身上殘缺畸形嘅部分整得更加嚇人，又見過另一種乞兒，佢哋粒聲唔出坐喺坑渠旁邊，好似等待死亡嘅來臨。另外，我又經過洞悉世故嘅老伯，經過眼神空洞且呆滯嘅婦女，見到呢啲眼神就知道佢哋已經接受現狀，聽天由命。我亦大步跨過污糟邋遢嘅坑渠及其週圍嘅細路仔。又經過冷靜無情嘅警員，佢哋嘅高效水平令佢哋成為世界優秀之列。又經過一班班嘰里咕嚕嘅外國遊客，佢哋坐郵輪嚟香港，一心想買到九龍工廠粗制濫造嘅產品。又經過喺度玩緊嘅細蚊仔，佢哋嘅生活範圍唔可以離開呢度至下一條橫街窄巷嘅坑渠位置。冇任何人會企圖改變呢啲狀況，種種嘅凌亂會一直繼續到夜闌人靜。呢個時候，女人同埋少女們會出現喺我面前，佢哋想將我帶進另一種愛情，不過我所渴望嘅係喺別處。

And now I have several stone figures of my lady-love. They are all different, each reflecting the craftsman’s own idea of the nebulous quality which finds expression in the concept of Kwan Yin. But as in life, none has the same mystique as the one which first so captivated my fancy.
到而家，我已有好幾座石制雕塑，而佢哋一律都係我親愛嘅女人。但佢哋都唔一樣，每一座都表現出個別工匠對觀音嗰種難以言喻嘅獨特氣質嘅個人見解同構思。不過，正正好似生活咁，未有一座可以比得上迷倒我嘅第一座觀音。